I got my motorcycle endorsement on my license in 2008. I was between deployments and I really wanted to get a bike, but I didn’t end up getting a bike until 2011. My first bike was a used 2007 Harley Davidson Sportster 883 Custom. 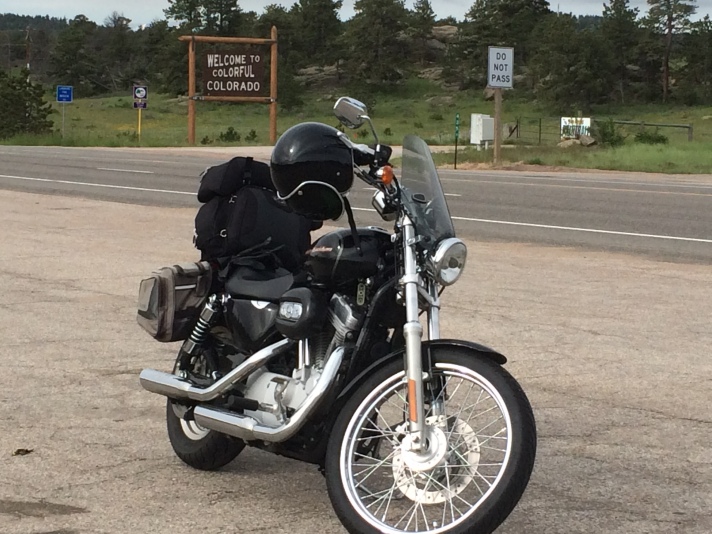 It was fun to ride and I had it for 6 years before I decided it just wasn’t enough bike for me. In November of 2017 I decided it was finally time to get something new. The natural Harley Davidson progression had me test riding the newest Fat Bob. I was not impressed, and definitely not impressed enough to pay the $22,000.00 they were asking for it. So I followed the love affair I have with sports cars, but in the motorcycle arena. I love Ferrari, so naturally I found myself planted in the seat of a Ducati. I ended up trading my loud, classically styled American cruiser for a sleek, sporty, Italian sport bike. It was a 2017 Supersport S that I rode off the showroom floor with less than 20 miles on the odometer.

I loved it…at first. I finally had a bike with the power I was looking for, but it wasn’t particularly comfortable for long rides. Despite being a “sport touring” bike, it was difficult to stay on for long periods of time. In the 3 years I had it I only put 2,780 miles on it. When it developed an issue I took it to the dealer where I had bought it to see about getting the problem fixed. It turned out that the same day I went in they had finalized the decision to no longer be a Ducati dealer. Since I didn’t want to have to ride into Denver to have the motorcycle serviced, I decided it was time to look at a new ride.

I had been toying with the idea of moving into an adventure bike, so I took a look at those. With Ducati not being an option I was left with a choice between BMW and Triumph. I have never been overly fond of the BMW adventure bikes. They always seem too big and I’ve heard they are pretty maintenance intensive. So really my only option was Triumph. Being a James Bond fan and knowing that Triumph had released the press package for their 007 model in support of the upcoming No Time To Die film, I was not upset about the idea of getting a British bike (if it’s good enough for Bond, it’s good enough for me). The one that immediately called to me had a white and green two-tone scheme and a big 21″ front tire. I talked to the sales guy and took it for a spin and fell in love. It had the comfort my Harley had, power more comparable to the Ducati, but it handled better than both. It also had a laundry list of creature comforts I never had before and it just felt good to ride it. When I got back to the dealership I told the sales guy “I think I’m going to trade the Ferrari for the Land Rover”. That got a laugh, but really it was a fitting analogy. A few hours later I was riding home on a brand new Triumph Tiger 900 Rally Pro.

I had no idea when I went to the dealer that I would end up on a new bike and I definitely didn’t know that the bike I liked had been receiving such rave reviews. Apparently this is an all new, updated model and it is the perfect bike for someone like me who is getting their first adventure bike. I’ve watched a few reviews of it and everyone is saying pretty much the same thing: It’s great. I agree with them. I got the bike on a Friday and spent most of the following weekend riding all over Northern Colorado. It’s a joy to ride and, unlike the Ducati, I feel comfortable taking in my surroundings and really enjoying the experience that there is to be had on the back of a bike.

It’s nice to enjoy riding again and I look forward to spending a lot of time on this bike. I’ll be setting the bike up with my GoPro, so keep an eye on the Spartan B377 YouTube channel to see what I get up to with it, and you can bet there will be lots of Instagram pictures coming too.

Published by Spartan B377

Stories both Fiction and Fact, thoughts, and just whatever I feel is worth committing to public record. View all posts by Spartan B377